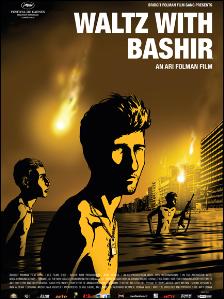 Waltz with Bashir (Hebrew: ואלס עם באשיר‎ - Vals Im Bashir) is a 2008 Israeli animated documentary film written and directed by Ari Folman. The movie deals with the strange nature of human memory, through interviews with several Israeli soldiers who took part in the First Lebanon War of 1982; visceral visual re-enactments of their memories; and conversations with psychologists about repressed memories, invented memories, and post-traumatic stress disorder.

In 2006, more than 20 years after the war, Ari meets up for drinks with his old friend Boaz. Boaz reveals that he's been having recurring nightmares about the dogs he had killed during the war as a marksman. Ari realizes that he can't remember any of his own experiences during the war. That night Ari experiences his first Flashback - a bizarre scene of himself emerging out of the sea at night, naked, to see stars falling out of the sky over Beirut. This begins his journey to rediscover his own past by seeking out the men who were with him in the memory, and deciphering the meaning of the memory itself - a memory of the night of the Sabra and Shatila massacres near the very end of the war.

The entire movie, including the in-person interviews, is fully animated - much of it in Adobe Flash. It was the first feature-length animated Israeli film.