Animation / War of the Worlds: Goliath 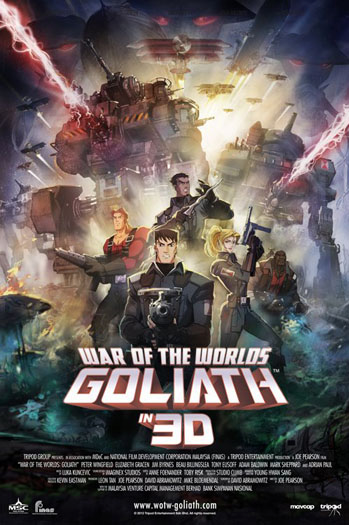 "We're not just French, or German, or Japanese. We are A.R.E.S. We are human."
"Mars's orbit is once again approaching a time of close proximity to Earth. I have detected large scale fluctuations of magnetic energy from the Martian surface, along with a series of low-frequency radio signals. It is my belief that the signals are a Martian military code hidden within sunspot activity. That they and the magnetic energy coming from the planet's surface serve as a prelude to an invasion."
—Prof. Nikola Tesla
Advertisement:

It is 1914, fifteen years after the invaders from Mars succumbed to Earth bacteria and humanity emerged victorious. The world has embraced a Dieselpunk aesthetic, with the Allied Resistance Earth Squadrons (A.R.E.S.) under Secretary of War Theodore Roosevelt, General Sergei Kushnirov, and Professor Nikola Tesla fielding an army of Walking Tanks and Cool Airships with soldiers from all over the world in defense of the planet. Unfortunately tensions in Europe mean a Great War is on the horizon, and even worse, there are signs that the Martians are preparing another invasion force. Sure enough they invade, and A.R.E.S. must fight a desperate war to protect mankind in a desperate struggle against a technologically superior foe no longer vulnerable to mere diseases.

War of the Worlds: Goliath provides examples of: