Music / Jeff Wayne's Musical Version of The War of the Worlds 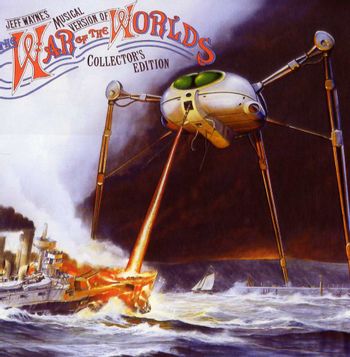 Jeff Wayne's Musical Version of The War of the Worlds is a 1978 concept album by Jeff Wayne, retelling the story of The War of the Worlds by H. G. Wells. It was IMMENSELY popular around the world, selling millions of records (and still doing so today) and spawned multiple versions of the album, a computer game, a DVD, a 30th anniversary live tour including Alexis James, Rhydian from The X Factor, Jason Donovan, and Jennifer Ellison in the cast, and a 40th anniversary tour with Adam Garcia, Nathan James and Jason Donovan reprising his role as Nathaniel. There's also a large amount of merchandise available at the website

The Coming of the Martians

The Earth Under the Martians