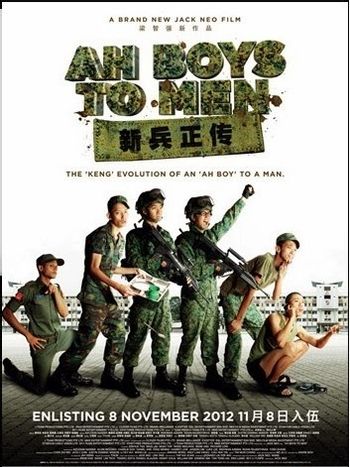 Welcome to Ninja Company
"But this prosperous nation did not come about by chance. It is because, of what you are wearing right now!"
—Captain Tham, Officer in-Command, Ninja Company.
Advertisement:

Ah Boys to Men is a series of Singaporean-Malaysian made Tokusatsu comedy-drama films directed by Jack Neo. The main subject of the movies is about the young men of Singapore undergoing their two-year mandatory National Service in the Singapore Armed Forces (SAF). The films also explores the various issues faced by the recruits such as coping with the new stressful military environment, mixing around with different people of various races and personalities and finding a sense of purpose in serving the nation.

The film is centred around a young man named Ken Chow, a hot-headed rebellious youth who is forced to serve his two years of NS when he is enlisted into Basic Military Training in Pulau Tekong as a recruit in Ninja Company - Platoon 2, Section 2. He initially bemoans his fate alongside his squadmates; Bang "Lobang" Lee Onn, Aloysius Jin a.k.a "Wayang King", Man In Ping a.k.a "I P Man", Ismail Mohammed and Muthu Shanmugaratnam. As striking personalities and different upbringings clash, they will slowly learn about themselves as well as each other as they train to become soldiers and learn what it means to become a man.

Ah Boys to Men Part 1 was the highest grossing movie in Singapore of all time, earning over SGD$234,000 on opening day, and over S$6.3 million in local box office sales, almost three times it's original budget.

The movie was initially broken into two parts, but due to the success of the first two and buoyed by fans for a sequel, Ah Boys to Men 3 was released on February 19, 2015. Instead of being a direct continuation, the film presents an alternate scenario where most of the cast, plus newcomer Hei Long, are being trained in the Naval Diving Unit instead.

The series consist of the movie trilogy, comic adaptations and even a musical show. The former two were already released in Asia.

The fourth movie is already released in Singapore on November 9, 2017. However, it made news when a Singaporean actor of Indian background accuses the production crew of stereotyping Indians

A spin-off titled Ah Girls Go Army was released in 2022 but it has been met with a lot of controversy.

There is also a web series titled Ah Boys: Hidden Warfare, which follows the main characters as they attempt to navigate the workplace.

Tropes found in the movies proper: