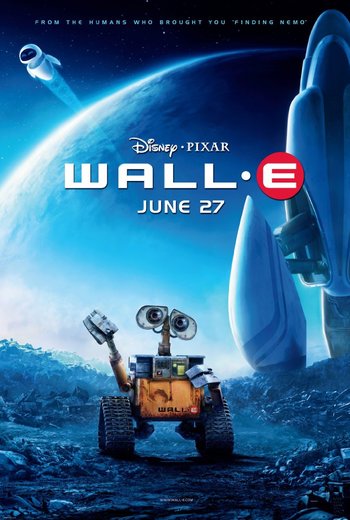 Put on your Sunday clothes, there's lots of world out there...
"After 700 years of doing what he was built for, he'll discover what he was meant for."
— Tagline
Advertisement:

In 2105, humans leave the now-inhospitable Earth while they enjoy a five-year vacation cruise in space so it can be cleaned up by an army of "Waste Allocation Load Lifter - Earth class" robots or WALL•E for short. Seven centuries later, one robot — the WALL•E in the title — is still collecting junk and living with his pet cockroach. One day, WALL•E is going about his business as usual when a spaceship drops off a much more modern robot. Her name is EVE (Extraterrestrial Vegetation Evaluator) and WALL•E is smitten at first sight. When the ship comes back and picks her up, he stows away. The return trip brings him back to the remnants of humanity, and that's when things get really complicated...

Known for its excellent CGI and sound design, the film hearkens back to the silent film days of yore, with virtually no dialogue for the first forty minutes of the movie.

Sigourney Weaver provides the voice of the computer. Fred Willard appears in what is to date the only live-action performance in a Pixar film, as Buy 'n Large CEO Shelby Forthright.

For information about the DVD short, BURN-E, check the Pixar Shorts page.