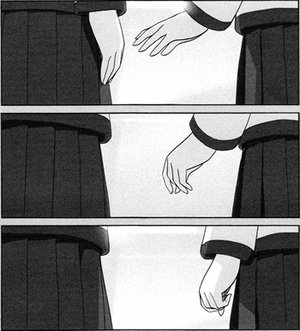 A character considers taking the hand of a crush, sometimes reaching out, but decides not to. Standard way to show there is some attraction between the characters, at least one way, and usually it's a case of Unresolved Sexual Tension.
Advertisement:

There are many ways this trope can come about. Perhaps the characters were interrupted by a ringing phone, a knock on the door or a thunderstorm. Perhaps the character is unsure how the other will react, and perhaps they are confused and unsure of their own feelings. Perhaps they remembered their deceased beloved one whom they had promised never to forget, or the thought of a Relationship Upgrade became just too frightening.

Whatever is the reason, it's without a doubt connected to Status Quo Is God, just like an Almost Kiss. Compare/contrast Take My Hand!, The Un-Hug.