Literature / Harry Potter and the Order of the Phoenix 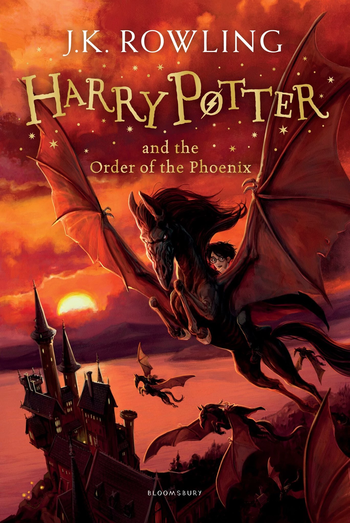 "Please sit down. I am going to tell you everything."
—Albus Dumbledore: [to Harry] and the Teaser for the book
Advertisement:

Harry Potter and the Order of the Phoenix is the fifth book in the Harry Potter series. Published June 21, 2003 after the longest gap between Potter books — three years. Some impatient fans speculated that J. K. Rowling was suffering from Writer's Block, but this was not the case — she simply felt she needed a break after the breakneck pace of writing the first four books, and had to play catch-up to put in plot threads that Executive Meddling had cut from earlier books. It was also due to her focusing on production of the first two films of the series that were released in 2001 and 2002 respectively. For the rest of the series there were only two-year gaps between books.

Voldemort's back, but the Ministry of Magic is in denial, so they decide the best solution is to start a Government Conspiracy and cover up all the evidence. Then they send one of their own, Dolores Umbridge, to Hogwarts to take over. At the end an even more major supporting character is Killed Off for Real, officially signalling that from now on Anyone Can Die.

This entry was in the works longer than any other book in the series besides the first one. In the three-year gap between Goblet of Fire and Order of the Phoenix, speculation flew, Fanfics such as The Draco Trilogy reigned, and the franchise took off as a global entertainment brand after the release of the first two films, which all led up to the release of Order becoming one of the biggest entertainment events of 2003.

Character Development abounds, significantly for Ginny and Neville and particularly so for Harry, who also stops being a Knight In Shining Armour as his personal flaws are brought to light.

Followed by Harry's sixth year at Hogwarts, in Harry Potter and the Half-Blood Prince. Its film adaptation was released in 2007.

Alternative Title(s): Order Of The Phoenix