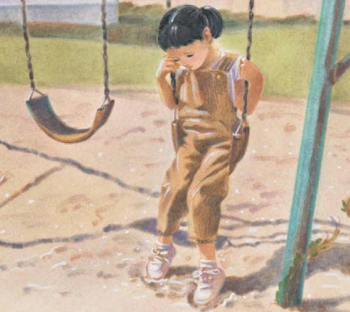 "One swing set, well worn but structurally sound, seeks new home. Make memories with your kid or kids so that someday he or she or they will look into the backyard and feel the ache of sentimentality as desperately as I did this afternoon. It's all fragile and fleeting, dear reader..."
— Free Catch All ad placed by Hazel and Augustus, The Fault in Our Stars
Advertisement:

A popular way to illustrate that someone suffers from a trauma of some sorts is showing them sitting alone at a children's playground, usually on the swing, often at dusk or night. In most cases, the trauma in question is related to a childhood experience, although the person in question can be of any age (child or adult).

If the person is a child, it may imply Parental Abuse or other family troubles; if done with adults, it can show how they still suffer from said childhood experiences.

It's common for another character to come out and offer some words of consolation while sitting on the other swing.