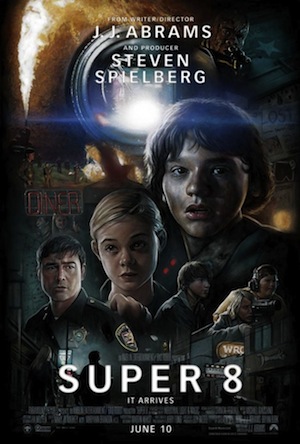 "There's a reason that Super 8, its cool thrills, also seems a work of innocence: it takes incidental inspiration from the films of a director who, back in 1979, was the J.J. Abrams of his day. Look closely and you'll see that Super 8 is a medley of tropes from the films of Spielberg's early prime."
— Richard Corliss, Time magazine
Advertisement:

Super 8 is a 2011 Science Fiction monster film written and directed by J. J. Abrams and produced by Steven Spielberg. It is an homage to classic "adventurous children" movies, particularly those made/produced by Spielberg, like E.T. the Extra-Terrestrial, The Goonies and especially Close Encounters of the Third Kind.

A group of middle schoolers in a small Ohio town in 1979 are dedicated to making a zombie movie to enroll in an upcoming film festival, with Charles as script-writer and director, his best friend Joe as the make-up artist and other cast and crew members like Martin (lead actor), Cary (pyrotechnic/pyromaniac) and Preston (misc crew/extras). Charles manages to convince a girl and classmate, Alice, to play the part of the wife, and she and Joe start to form an affection for each other. Unfortunately, there are some lingering emotions surrounding the death of Joe's mom several months prior, as well problems with his distant father, a deputy in the local sheriff's office.

While filming a scene late at night, they happen upon a freak train crash and barely escape before the authorities show up. Shaken up by the experience, they find that they accidentally filmed something on their Super 8-mm film camera in the aftermath of the crash, and soon they're caught up in strange happenings and a secret military operation.

An interactive version of the teaser trailer is bundled with Portal 2, found in the game's Extras section. There's also a prequel comic book that was bundled into the second issue of the Batman: Arkham City comic book tie-in. It details the 1958 events referred to in the film and how Col. Nelec got involved with the situation.

Not to be confused with 8mm. Has nothing to do with the motel chain.