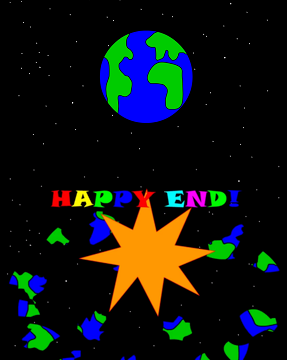 "Happy End? What the hell is Happy End?"
"All yet seems well..."
— The King of France, at the end of All's Well That Ends Well

Bob's new film has the most wonderful, inspiring, uplifting Happy Ending imaginable. Surely everyone will love it just as much as he d—

Wait... why is the audience crying? Why are the critics lambasting it? Why is its Nightmare Fuel page longer than its main article?

Well, it turns out the majority of the viewers don't believe that the ending is happy. Whether through personal taste, changing social norms, or just consequences that never even occurred to Bob, all the satisfaction leaches out of the characters' triumph, leaving behind a feeling of unease that anyone could make a film with that ending, let alone call it a happy ending.

Compare Inferred Holocaust and Only the Leads Get a Happy Ending. The afterlife version of the trope would be a Hell of a Heaven or an Infernal Paradise. When the ending is not only uncomfortable in hindsight but supports some kind of half-considered moral, see Glurge.

As an Ending Trope there will be unmarked spoilers!

Destroy All Humans! ends with Crypto eliminating everything getting in the way of his mission to harvest the brain-stems of American citizens for the propagation of the Furon race.

Destroy All Humans! ends with Crypto eliminating everything getting in the way of his mission to harvest the brain-stems of American citizens for the propagation of the Furon race.