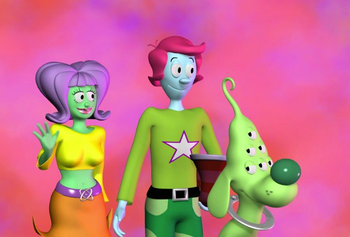 The Groovenians was a 2002 half-hour CGI television special created by surrealist painter Kenny Scharf. It served as a failed pilot to a potential series that never came into fruition and aired on Cartoon Network only twice, the first time being on the Adult Swim block and the second time being on the "Fridays" block. After a 2003 nomination Annie Award for Best Animated Short Subject (and an attempt to pitch it to MTV and VH-1)

, the short was never heard from again. The cast features Paul Reubens as the main character Jet, Drena DeNiro (Robert's daughter) as Glindy, Dennis Hopper in the dual role of the father and the villainous King Norman and Jeff Bennett as Suavo. The B-52s contributed the titular theme while Mutato Muzika composed the music and the "Money Song". Jordan Reichek of Crash Twinsanity fame co-wrote the story, served as the production designer and drew the storyboard.
Advertisement:

Jet and Glindy, inhabitants of the planet Jeepers, are two wannabe artists who feel unappreciated by both their parents and the world at large. Their parents seek to enter Glindy in a boring office job, and for Jet to marry Glindy's unattractive sister. But one night, a boy named Nixon gives them a key to Groovenia, a paradise of artistic freedom. Desiring to live in this world, the two run away and set out for Groovenia, eventually saving it from the tyrannical reign of the Normals and the greedy King Norman.

The short can be viewed here