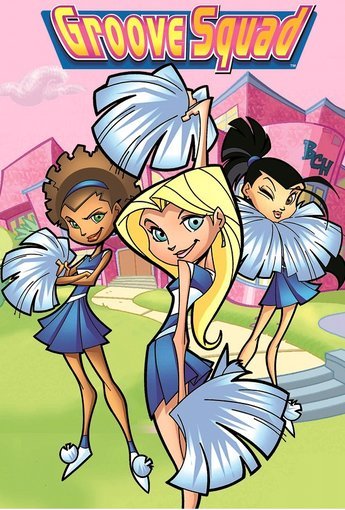 in late 2002—NSMT lasted from October 6th of 2002 to December 29th of 2002, with Groove Squad being the only movie to have an original story, as the rest were all either based on existing cartoons (made by DiC Entertainment) or were loose adaptions of classic literature.

The titular group consists of three high school cheerleaders named Chrissy, Ping and Mackenzie (more commonly called "Mac"), who're best friends and are basically like your average teenaged girls—they're concerned with things like their looks, boys and popularity, and are also very focused on getting ready for an upcoming cheerleading competition. However, one day, while getting their hair done at a local salon, the girls get zapped by a jolt of electricity that gives each of them one special power:

With help from some valuable allies (namely their best male friend and their hairstylist, the latter of whom also happens to be a former secret agent), the girls use their newfound superpowers to become superheroines and defeat a power-hungry Mad Scientist bent on world domination (said scientist also happens to be the father of one of their fellow cheerleaders).