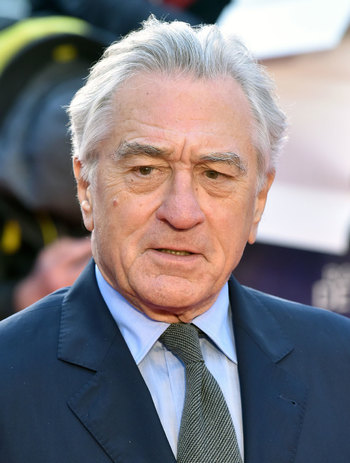 Robert Anthony De Niro Jr. (born August 17, 1943) is often regarded as one of the greatest actors in American film history.

He has appeared in a lot of gangster/cop flicks and is often compared to Al Pacino. De Niro's most memorable roles include a young Vito Corleone in The Godfather Part II, Travis Bickle in Taxi Driver, and Jake LaMotta in Raging Bull.

Under Martin Scorsese's direction, he was one of the first actors to really take Dyeing for Your Art to the next level and considered to be the heir of Marlon Brando in the honor roll of Method Acting and a major inspiration for actors in the generations that have followed, including Daniel Day-Lewis and Leonardo DiCaprio among many others.

Tends to enjoy his privacy, and being asked about his family on interviews is his personal Berserk Button. In recent years he has become known for playing a number of parts in comedies.