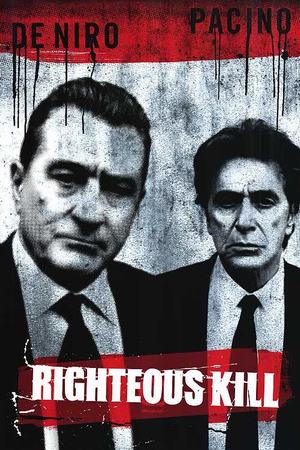 Detectives "Turk" and "Rooster" are two of the best detectives on the force. "Turk" coaches softball, "Rooster" is a chess genius. Both are good cops.

But after "Turk" plants evidence that lands a child killer in jail, suspects they've had run-ins with start winding up dead with mysterious poems nearby, and soon the chase is on for a vigilante serial killer with a thirst for righteousness.

Directed by Jon Avnet and released in 2008, Righteous Kill co-stars 50 Cent, John Leguizamo, Carla Gugino, Donnie Wahlberg, and Brian Dennehy. Pre-release it was hoped that this film would revive the faltering credibility of Pacino and DeNiro, as the last time they'd teamed up the world was gifted with the modern classic Heat. Alas, it did terribly both critically and commercially.