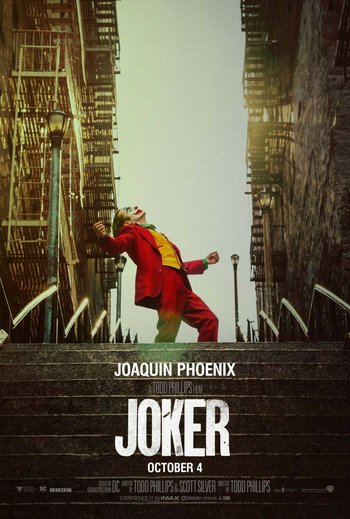 ♫ Send in the clowns... ♫
"For my whole life, I didn't know if I even really existed. But I do, and people are starting to notice."
— Arthur Fleck
Advertisement:

Joker is a 2019 American comic-book-inspired tragedy/crime film directed by Todd Phillips and co-written by himself & Scott Silver (The Fighter, 8 Mile), based on the DC Comics character of the same name. Described as an Origin Story of sorts, it stars Joaquin Phoenix in the titular role, a man named Arthur Fleck who descends into madness and villainy.

Set in the backdrop of an alternate version of Gotham City in 1981, Arthur Fleck tries to fulfill his dreams of making people smile by being a clown by day and a stage comedian by night — the latter prospect of which is failing to pan out. Depressed by his lot in life, a fateful series of events sets Fleck on both a downward spiral and an increasingly dark path of self-discovery...and Gotham will never be the same.

This work is the first DCU-inspired live-action film not to be a part of the DC Extended Universe since it began in 2013 (it is, however, still produced by the same movie division, DC Films). Instead, it is an Elseworlds story that uses elements of Batman lore to tell an original story. Phillips describes the film as an "exploration of a man disregarded by society [that] is not only a gritty character study but also a broader cautionary tale."

Although originally envisioned as a one-off with a clear beginning, middle, and end, Phillips indicated that he had ideas for a sequel if Joaquin Phoenix was on-board for it — and while he refrained from making any promises, the actor stated that he was interested in further exploring this iteration of the character. In light of the film's success, discussions regarding a sequel began as early as a few months after its premiere.

Plans for development on the sequel were announced in May 2021, and the sequel was officially confirmed in June 2022, with Phillips returning as director, him and Silver returning as co-writers, and Phoenix returning in the lead role. Further reports have also indicated the sequel will be a musical. As of August 2022, the sequel is titled Joker: Folie à Deuxnote Named for a rare psychiatric syndrome

, its name meaning "madness for two" in French and slated to release on October 4, 2024. Lady Gaga is confirmed to co-starnote While Gaga was reportedly in negotiations to star as Harley Quinn alongside Phoenix's Joker, her character in the film has not been explicitly confirmed as of this writing, with Brendan Gleeson, Catherine Keener and Jacob Lofland cast in additional roles.

For tropes regarding the 2008 graphic novel of the same title, refer to that page.

open/close all folders
Tropes A to F
Tropes G to L
Tropes M to R
Tropes S to Z
♫ That's life (that's life), that's life, and I can't deny it
Many times I thought of cuttin' out, but my heart won't buy it
But if there's nothing shakin' come this here July
I'm gonna roll myself up in a big ball... and die
My, my! ♫
Feedback