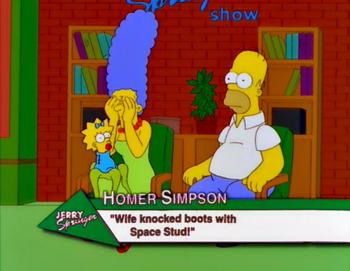 Needless to say, whatever success or resolution the protagonist or protagonists are trying to achieve will fail for a variety of reasons. It could be because one character could be trying to use it as a vehicle for themselves or paint themselves as the victim and the other characters as the villains. It could also be because the show and/or its (usually obnoxious) host manipulate the characters to how it wishes them to look like for ratings, drama, or even revenge. It could also be that in spite of gaining a talk show, chances are it may not be successful since they have no idea how to run a show or what interests the public. Whatever it is, it's going to make for good television, for better or worse and quite possibly have other characters watching at home and either being outraged by what they see and hear or simply enjoying the spectacle.

Keep in mind that this trope can be flexible. The time on the talk show doesn't have to last the entire 20-something minutes of the episode or major plot point of a film; it could last half the episode or even last for just one memorable scene. Also, although talk show implies a national or local program, it can also mean public access television (usually in the hopes of it becoming more famous).

Closely related to The Show Goes Hollywood, although here the show is usually broadcast or just happens to be in the city the protagonists are located in, especially if it's New York, Los Angeles or Chicago. Game Show Appearance is its game show equivalent. While it may end up with actual fistfights occurring, it has little to do with Talk Show with Fists. Compare "We're Live" Realization. Contrast Leno Device, where a talk show is used to show how an in-universe event has become a subject of discussion amongst the general public.