Film / To Die For 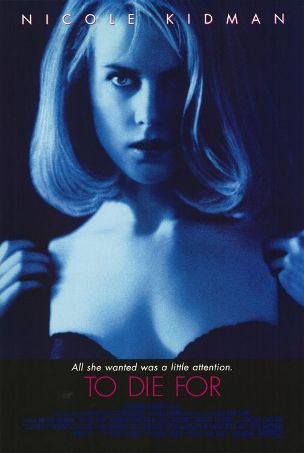 "You're not anybody in America unless you're on TV. On TV is where we learn about who we really are. Because what's the point of doing anything worthwhile if nobody's watching? And if people are watching, it makes you a better person."
— Suzanne Stone Maretto
Advertisement:

To Die For is a 1995 Black Comedy written by Buck Henry and directed by Gus Van Sant.

The film is an incredibly dark satire on celebrity obsession. Nicole Kidman plays Suzanne Stone Maretto, a beautiful and ruthlessly ambitious (if not particularly talented or overly bright) young woman desperate to become a world-famous news anchor, even if she has to commit murder along the way.

The film also starred Matt Dillon and a then-unknown Joaquin Phoenix in one of his first major roles.