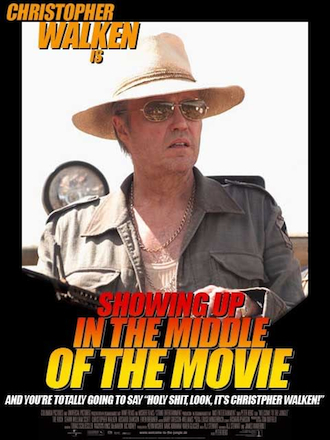 In the role of a lifetime.
"What matters in that kind of role is not how many lines you have, but how few. What counts is how much the other characters talk about you. Such a star vehicle really is a vehicle. All you have to do is ride."
— Orson Welles, explaining this trope and his own success in The Third Man
Advertisement:

A character that has limited screen time, and usually not much in the way of plot relevance, but is still one of the most memorable things in the movie. They may even be given top billing, or at least an "And Starring" credit, along with the more obvious stars.

This is not the same principle as Ensemble Dark Horse, who is usually a secondary character that still gets to make appearances every so often (in comparison, an One-Scene Wonder can range from primary to less than tertiary, so long as their screen time is relatively insignificant), nor is it the same as Dead Star Walking, because the intent is not to fool you into thinking that the actor will appear more often. The character just appears, gives a show-stealing performance, and then is gone. Like a Spear Carrier, only way more righteous. Like a Cameo, except you don't have to recognize the actor to appreciate the scene for all it's worth. You know you're dealing with this sort of character if you start referring to "their scene."

Many characters of this type will be clergymen of some kind, particularly in comedy. A good reason this works is because of The Vicar principle, and because clergymen are really only needed for wedding scenes anyway. The character type needn't be played for comedy, but frequently is. Often a Large Ham.

A one-scene wonder that's very weird and out of place results in a Big-Lipped Alligator Moment.

Also see Kent Brockman News. Compare Ham and Cheese, Spotlight-Stealing Squad, One-Take Wonder, and Small Role, Big Impact. Fanfic authors are prone to make characters like this via O.C. Stand-in. If the character becomes so popular that the writers decide to come up with an excuse just so be able to use him again, he's an Ascended Extra. Don't confuse with Scene of Wonder.

If the movie is particularly bad, the One Scene Wonder may be the only thing remembered about it, or indeed the only reason anyone watches it. When a minor character in a musical does this through the use of one fantastic song, it's Minor Character, Major Song.

The Wolf appears in only one scene towards the end, but manages to leave one hell of an impact on the viewer & characters.

The Wolf appears in only one scene towards the end, but manages to leave one hell of an impact on the viewer & characters.