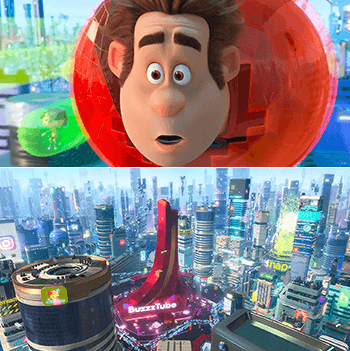 "Toto, I've a feeling we're not in Kansas anymore."
— Dorothy, The Wizard of Oz
Advertisement:

You open the door, go through it, and the lights are turned on. And what you are seeing now, leaves you in awe for a moment, because you have never seen something like this before. During this moment, you look around to take in all of the details.

If you just experienced this, you may have had a Scene of Wonder. Here, one or more characters see some kind of environment for the first time, and have a short scene where they look around and are struck by what they see. Their reaction could be a positive one, like amazement, but does not have to be bound by this as it could also be something negative, like horror. Expect to be exposed to the environment in its entirety, and by shots or descriptions of details or smaller events happening in it. Bonus points if the music swells when the reaction happens or when we see the environment.

No Zero Context Examples please! When adding examples, please say who is reacting and at what. Also add why the environment evokes the reaction and how the characters are reacting.