Never the Selves Shall Meet 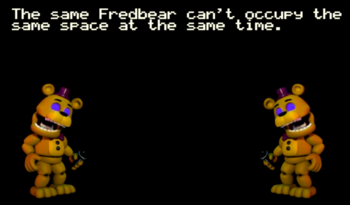 Well, that's one way to end the game.
"Alright, this next test may involve trace amounts of Time Travel. So, word of advice: if you meet yourself on the testing track, don't make eye contact. Lab boys tell me that'll wipe out time. Entirely. Forward and backward. So do both of yourselves a favor and just let that handsome devil go about his business."
— Cave Johnson, Aperture Science CEO, Portal 2

For some reason, encountering yourself — whether as a time-traveler or in Another Dimension — is frequently Very Bad; either it's unhealthy for you in particular, or it creates a Temporal Paradox.

This may result from attempts to apply causality to time travel: you can't meet a past version of yourself without having memory of it and the future version of yourself cannot be surprised to see past you, having had to be there to see it to make it possible. However, this can be easily avoided if you fail to recognize yourself. As a result it's generally correlated with time travel of the Timey-Wimey Ball variety, and negatively correlated with Stable Time Loops (though there are exceptions). Compare Future Me Scares Me; contrast Screw Yourself.

Alternatively, the show might say that you're both made out of the exact same atoms, and the universe gets wonky when you have matter touching itself.

Note that this trope is now so well known that movies which use Time travel often only throw out a one-liner warning: "Whatever you do, don't meet up with yourself!" It's now becoming a trope in and of itself to make the reason for not meeting up not a dire end-of-the-world reason, but merely for convenience of the Master Plan. These often result in My Future Self and Me.

A closely related trope is Only One Me Allowed Right Now.