Recap / Doctor Who S38E5 "Fugitive of the Judoon" 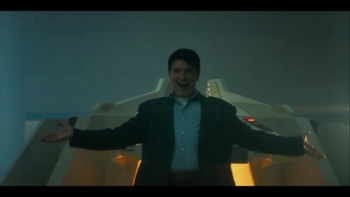 Making a rogue Time Agent return after a decade. One of Merlyn's greatest tricks, and we (apparently) don't mean a future Doctor.
Advertisement:

The one with the return of a rogue Time Agent, rhino cops, and the one where Sir John Hurt gets some company.

It's Ruth Clayton's birthday, and things are good. Leaving her husband Lee with a request to get her a cake, she heads off to her job as a tour guide in the city centre. The day is going well, apart from dealing with enamoured and suspicious barista Allan. But onboard a Judoon ship high above the Earth, the thuggish space police detect something in Gloucester and prepare to move in. Meanwhile on the TARDIS, the Doctor's companions get her to admit that she's been searching for the Master and slipping off home, when the conversation is interrupted by an alert: the Judoon have set up an enforcement field on Earth. The Doctor can get the TARDIS into the city, but it won't be easy.

The Judoon land and begin cataloguing the citizens, resulting in Ruth's friend Marcia getting disintegrated when she runs into the enforcement field. Meanwhile, the TARDIS lands at the café to find Allan and Lee, who is noticeably concerned when he hears the Doctor talk about the Judoon before he leaves. After warning Allan to keep the door locked and stay inside, the Doctor leaves to confront the Judoon, not noticing that something has teleported Graham away. Lee finds Ruth and quickly takes her home, asking her to trust him and saying they have to run. The Judoon arrive at Allan's shop, and he offers up his file on Lee, assuming he might be the fugitive they are looking for. But after Allan gives the Judoon captain a shove for making a mess, he is rewarded with a Judoon execution.

Graham finds himself on an alien ship, where a voice tells him to stay still while he turns off the security system. When the owner of the voice teleports in, it's none other than Captain Jack Harkness! Who proceeds to give Graham a big kiss, before revealing that he thinks Graham is the Doctor. Graham clears up the confusion, while Jack explains that he needs to alert the Doctor of a universal threat. And he seems quite intrigued/enthusiastic when Graham tells him that the Doctor is a "she" now.

Back in Gloucester, the Doctor, Ryan and Yaz track the Judoon leader to the Claytons' building, which they have identified as the location of the fugitive. The mercenaries are setting up a temporal displacement weapon to assault the building. The Doctor uses the psychic paper to claim she's an "Imperial Regulator", and she and her companions then claim that Earth has laws giving fugitives the right to third-party arbitration to buy time to talk to the Claytons. They also notice that Graham is missing, but have no time to wonder about his whereabouts, assuming he's just lagging behind. Reaching Ruth and Lee, the Doctor immediately notices that they've been packing. Despite the danger, Lee refuses to explain what he knows, as the Doctor points out they are running out of time and attempts to devise an exit strategy. Eventually, Lee persuades a reluctant Ruth to go with the Doctor as he's willing to speak with the Judoon, while Ryan and Yaz attempt to distract them for a bit. But as the Doctor and Ruth slip away, Ryan and Yaz only get as far as informing the Judoon that the fugitive is willing to talk before getting snatched away by Captain Jack's teleporter. Left alone, Lee sends a text message on his phone.

The Judoon enter the flat and confront Lee, who surrenders. But the conversation is interrupted by the arrival of one Commander Gat, a representative of the Judoon's employers, who reveals that Lee is not the fugitive. After mocking him for the sentimentality that led him to keep the old service medal that let him be tracked down, and pointing out that they have the same training, she summarily disintegrates Lee. In space, Ryan and Yaz find Graham and are introduced to Captain Jack, who subsequently assumes Yaz to be the Doctor, and is surprised to find out she has three companions right now. He bemoans the cheap, stolen equipment and realizes that there must be Judoon in the Doctor's vicinity, explaining why he can't get an accurate lock on her as their enforcement field is interfering.

The Doctor and Ruth take shelter in Gloucester Cathedral, and the Doctor asks Ruth to tell her everything she knows about Lee. In shock, Ruth doesn't have much to say and has no idea what's going on. Before they can get far, though, the Judoon burst in and surround them, identifying Ruth as the fugitive they're after. When the Doctor demands an explanation as to what happened to Lee, the Judoon Captain shows a hologram of Lee's death. Ruth's phone dings, and upon reading the text message she just got, she has a vision of a building and abruptly develops martial arts skills, attacking and taking down multiple Judoon before threatening the rest of them with a stolen blaster. The mercenaries depart after Ruth attacks the captain and breaks her nose horn off. But afterwards, Ruth is in shock, having no idea how she did any of that. The Doctor gets her to show her the text message that triggered it, which reads "Follow the light, break the glass". Ruth reveals that she had a vision of the remote lighthouse she grew up in, and the Doctor speculates that the message was a trigger phrase to activate some dormant personality inside her — her true self, whoever that is. Realizing that answers must be at the lighthouse, the Doctor tells Ruth they're going to have to go there.

In space, Jack's next attempt to teleport the Doctor is prevented by security systems onboard the stolen ship, which is being chased. The security nanogenes are going to kill him, and since time is running out he has to pass his message on via the companions: "Beware the Lone Cyberman!" Graham, Ryan and Yaz don't know what Cybermen are, though, but Jack assures them they'll find out. He says that the Cybermen have become a Vestigial Empire, as "to defeat them, the Alliance sent this thing back through time, across space" but that will all change if the Lone Cyberman gets what it wants, and it is imperative that the Doctor not give it what it wants "at all costs". He also asks them to tell the Doctor that he promises he'll see her again, before being teleported away. The companions are left alone for a moment before the system Jack set up sends them back to Earth where they were taken from.

On the way to the lighthouse, Ruth explains that she grew up there with her parents, before moving to Gloucester in late 1999. Her parents are buried there now, and she hasn't been back in years. Once there, Ruth offers to start a fire while the Doctor asks if she can look around upstairs. But on the balcony at the top, the Doctor, scanning the area, notices a gravestone and, finding something odd about it, goes down to investigate. The gravestone is unmarked, and the Doctor, figuring there's something unusual about the grave, begins to dig it up. Ruth, after starting the fire, is looking around when she notices a fire alarm, with instructions to "BREAK GLASS". And when she does, a familiar golden light erupts from the device and goes into her.

At the same time, the Doctor finds another ray of golden light. Another familiar ray. In fact, a whole large sign that reads: “POLICE PUBLIC CALL BOX”. As the Whovians realize the numbering's getting another shakeup, inside the lighthouse the restored Ruth finds and opens a chest containing a large energy weapon, then heads to the closet for a quick wardrobe change.

The Doctor, stunned and perplexed, turns around to find Ruth, now in an orange sweater, double-breasted Waistcoat of Style, tighter trousers, and a dark blue greatcoat. In a significantly more austere manner, Ruth confirms we've got another Doctor, and tells Thirteen that the grave contains a time machine known as the TARDIS. She teleports herself and Thirteen inside her TARDIS (with classic roundels) and they prepare to confront the Judoon.

On Ruth’s console, Thirteen recognizes a Chameleon Arch. Ruth explains to Thirteen that she used it to hide out from her former employers, and appointed fellow Time Lord Lee to be her protector. Thirteen asks how she can be the same person as herself when she doesn’t remember being in Ruth’s body. Out comes the sonic to confirm that Ruth is indeed the Doctor, but Ruth has her own questions to ask. The two wind up asking the same questions in perfect unison, further proof that they have the same brain and are the same person.

The Judoon ship in Earth orbit locks on to Ruth’s TARDIS and pulls it up via tractor beam. Stepping out, Ruth orders Thirteen to stay behind her, keep quiet and obey the Judoon while she interrogates them about their motives. Commander Gat shows herself, prompting Ruth to argue with her about Gallifrey and the Time Lords (of whom Gat is also a member), but Thirteen cannot resist cutting in to ask her burning questions, revealing herself to be the Doctor in the process. Gat looks at her in shock, having never seen two incarnations of the same Time Lord together before. Thirteen tries to defuse the situation, explaining that Gallifrey has been destroyed twice, once by the Time War and again by the Master. She convinces Gat by touching her face to make telepathic contact, showing her the ruins of Gallifrey she saw after the Master’s rampage.

Gat snaps and seizes the laser weapon from Ruth. Ruth, however, warns her not to fire the weapon. Gat promptly does so, but it backfires and obliterates her. Thirteen then threatens to call the Judoon’s superiors in before using My Rule-Fu Is Stronger Than Yours to warn them not to touch Earth. Ruth drops Thirteen off in the middle of Gloucester, taking care to avoid Thirteen’s TARDIS before going off to see the universe again. Graham, Yaz and Ryan find Thirteen, now sullen and withdrawn, and relay Captain Jack’s warning about the Lone Cyberman.

The Doctor explains to her fam in her TARDIS that with her recent encounters with the Master and Ruth and the news from Captain Jack, something must be coming for her, as if time were swirling around her. Graham, Yaz and Ryan tell her she was so important in helping them grow, and they think she is the best person they have ever known, before affirming they will always be by her side when the time comes. Before the Doctor can thank them, however, three alarms go off in the TARDIS. The Doctor begins to investigate, and the four are off on another adventure...