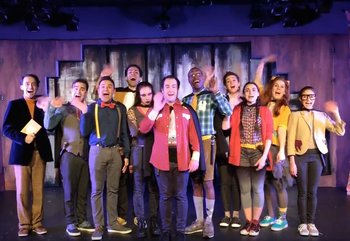 "Hiiiii! "note From left to right: the Narrator, Ernie Mac, J. Finch-Fletchley, Cedric Diggory, Megan Jones, Wayne Hopkins, Oliver Rivers, Hannah Abbot, Susie Bones, Leanne, and Sally Perks.
"For seven years a certain boy wizard went to a certain Wizard School and conquered evil. This, however, is not his story. This is the story of the Puffs... who just happened to be there too."
Advertisement:

Puffs or Seven Increasingly Eventful Years at a Certain School of Magic and Magic is an Off Broadway comedy by Matt Cox that takes its name from the Hufflepuff House of Harry Potter fame and tells the story of some of Harry's forgotten peers.

With an early run at the People’s Improv Theatre, the show moved to the Elektra Theatre, then to New World Stages, where it ran until August 18, 2019. A proshot can be found on Broadway HD.

During the COVID-19 pandemic, three other stories within the Puffs universe were released by Matt Cox and the cast of Puffs. These are Nineteen-ish Years After or There and Back Again: A Puffs Tale Parts 1 and 3, a parody of Cursed Child; Dude, Where's my Fantastic Friends?, a parody of Fantastic Beasts; and Puf3s: Eventfulness Maximus, an original story that ties the entire Puffs universe together, Avengers-style. Those can be found on YouTube.

Puffs the Play contains examples of:

The sequels contain examples of: