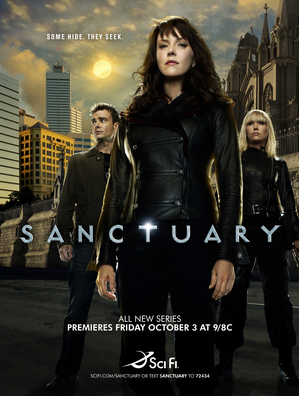 "We protect the two dominant species of this planet from one another: humans and abnormals."
Advertisement:

Sanctuary (2007-2011) is an Urban Fantasy series that started as a Web Video series. Notable primarily for its good writing despite a low, low budget, and for Amanda Tapping as Doctor Helen Magnus, the immortal head of the Sanctuary in the title.

The show follows Dr. Will Zimmerman and the other members of the Sanctuary, as they protect Abnormals (the "real" creatures that inspired the folklore, legends and myths about monsters and other supernatural weirdness, but that turn out not only to exist, but also to have a perfectly rational "scientific" explanation behind each one) and have adventures.

No relation to the manga, anime, and live-action film of the same name about two Japanese survivors of the Khmer Rouge trying to remake their society in the roles of a politician and a Yakuza. Nor is it any relation to the place where runners go. Or Dark Brotherhood assassins.