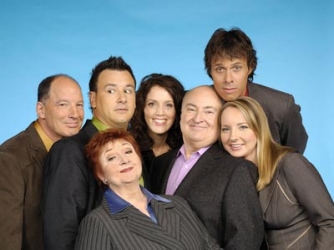 Royal Canadian Air Farce is a long running Sketch Comedy group which began radio broadcasts in 1973 and switched to TV in 1993, with TV specials before that time in 1980 and 1992. The original stable cast consisted of Roger Abbott, Don Ferguson, Luba Goy, John Morgan, and Dave Broadfoot, many of whom have become institutions in Canadian entertainment in their own right.

The Air Farce's mix of political and cultural satire has been a mainstay of the program, and has in many ways set the mold for political satirists of later years, both Canadian and abroad.

The show came to a close with the 2008 "Final Flight" season, culminating with their series finale on December 31, 2008. However, the troupe continued to produce New Year's Eve specials until the final such broadcastnote due to CBC "budget constraints", or in other words, cutbacks took place on December 30, 2019.