Getting Crap Past the Radar 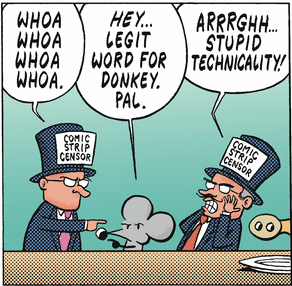 What else could "ass" refer to?
"The bloody GIR was the single frame drawing that Chris Graham drew and I was putting it into the show at random points hidden within things. It is very hard to make out...and I am not telling where or when those frames are (you have to be a master to see Bloody GIR, even with a frame-by-frame VCR). If anyone finds it...let me know."
— Steve Ressel, director of Invader Zim.
Advertisement:

Getting Crap Past the Radar refers to instances in which a writer, artist or other creator puts inappropriate content — stuff that directly violates the censorship standards they are working under — into their material with the deliberate intent to get past this censorship.

How this is accomplished may vary. The content submitted for ratings may be so offensive that the demands to cut it down end up missing things that would have otherwise been obvious (AKA the Censor Decoy). The creators may hide offensive content as Easter Eggs. Sometimes the Media Watchdogs are just asleep at the wheel. Such events can result in bad (or good) press for a work, or angry calls to a network or studio.

It is important to distinguish this trope from other tropes like Parental Bonus, Demographically Inappropriate Humour, Subtext, and Accidental Innuendo. In these cases, younger audience members are expected to miss the messages, but adults will read them loud and clear. Censors are usually fine with such things, so it's not a violation of media standards. Indeed, this is often a deliberate and widely accepted ploy to engage older audiences in what is nominally a family-friendly work. As such, it is not Getting Crap Past the Radar.

Compare Does This Remind You of Anything?. Contrast with Defying the Censors, in which the creators fight to have their controversial work shown to the masses; and Surprisingly Lenient Censor, in which the censors are more easy-going than the creators expect. See also Crosses the Line Twice, which can be the end result of gradually increasing the level of inappropriate content.

Important note for editors: To qualify for this trope, content must meet three criteria:

That last point means that, yes, examples will require citations. Citations can take any of the following forms:

American radio stations
American Broadcasting Company
Atari
British Broadcasting Corporation
British Phonographic Association
The British Phonographic Association (BPI) is the British industry group responsible for promoting and self-regulating music and audio dramas in the UK. In 1995, they adopted the "Parental Advisory - Explicit Content" labels already in use by the Recording Industry Association of America to identify if a CD or digital song contains strong language or themes. The criteria for when to apply the label can be read here

.
Bulletin (literary journal)
Cartoon Network
CBS
Chrysalis Records
Comedy Central
DC Comics editorial
Disney
Epic Records
Eurovision
Food Network
Fox
Fox Kids
Hogarth Press
KingsIsle Entertainment
Lego
Lego has an internal policy, made official in 2010 after many years of being the de facto rule, of avoid[ing] realistic weapons and military equipment that children may recognize from hot spots around the world and to refrain from showing violent or frightening situations when communicating about LEGO products. At the same time, the purpose is for the LEGO brand not to be associated with issues that glorify conflicts and unethical or harmful behavior.

American TV Parental Guidelines
The TV Parental Guidelines were first implemented by Congress in 1996 and are enfored by the Federal Communication Commission. TV shows aimed at children and teenagers are required to display the appropriate age rating when broadcast in America. Official guidelines can be found here

Genuine double entendres don't mandate anything higher than TV-PG, but this was still rated TV-Y7.

.
British Board of Film Classification
The British Board of Film Classification (Censorship before 1984), founded in 1912, is responsible for assigning age ratings to films and TV shows released in the UK. They also rated video games and still have the authority to do so, but that responsibility has been delegated to PEGI since 2012. You can find their current criteria here

. While nowadays they mostly just assign ratings, in the past, they were perfectly willing to order changes or ban films altogether, and for often ill-defined reasons; you can find some loose guidelines from the early days here

.
Canadian TV Classification System
The Canadian TV Classification System was introduced in 1997 to cover English-language Canadian TV shows (French-language TV has its own system). The age ratings are intended to parallel those of movies, but the TV ratings tend to be stricter than their film counterparts. The TV ratings lack the A rating and add C and C8 ratings for young children. The full rules can be found here

As with the G rating, C8+ does not allow any form of sexuality.

and assign a rating based on overall impact; as such, ratings are rather subjective.
Classification And Rating Agency (USA)
The Classification And Rating Agency (CARA) is a board appointed by the Motion Picture Association of America (MPAA) that has assigned age ratings to movies shown in America since 1968, following the demise of the Hays Code. CARA are stricter about sex and more lenient on violence than ratings agencies in other countries, though are generally more liberal on both counts than people think. By their own rules, the body is composed solely of parents living in the state of California. You can read their official guidelines here

. Note that CARA assigns ratings based on whether (they estimate) American parents would find the movie objectionable rather than by (somewhat) measurable criteria, as is done by other bodies; this policy infamously leads to movies with LGBT content automatically garnering higher ratings than if everybody was heterosexual. As such, care must be taken when judging a movie's rating against the guidelines.
Comics Code Authority
The Comics Code entered force in 1954 amid widespread (and unfounded) fears that comics were corrupting the youth of America. While not legally binding, American retailers would usually refuse to sell comics that didn't conform to the Code's strict regulations on morality, violence, and sex. You can view the original 1954 version here

. The Code was officially made defunct only in 2011, but by that time only Archie were still seeking approval.
Entertainment Software Ratings Board (USA and Canada)
The Entertainment Software Rating Board is the industry body responsible for assigning age ratings to video games in America and Canada. Their current ratings criteria can be found here

.
Hays Code
The Production Code of the Motion Picture Industry, commonly referred to as the Hays Code, was a set of guidelines to which the American movie industry was subject from 1934 to 1968; while not legally binding (indeed, it was adopted specifically to avoid legal restrictions on movie content), no movie could be shown in American cinemas without approval from the MPPDA (today known as the MPAA). You can read the entire thing, complete with the various revisions, here

.
Irish Film Classification Office
The Irish Film Censor's Office, modelled on the British Board of Film Censors, was established by the Censorship of Film Act 1923 to ensure films (and later videos and DVDs) released in the newly-independent Ireland were suitable for public viewing. At the time, this really meant censoring films to comply with the dictates of the Catholic Church, and as such IFCO has long been one of the most notoriously strict, conservative ratings agencies in Europe. Fortunately, as Irish society has become more liberal, so has IFCO, with the C in its name being changed from Censor to Classification in 2008 to reflect the fact that its duty is just to apply age ratings, not to change or ban films (mostly

). Their age ratings and the criteria can be viewed here

.
Jockey Club (USA)
The naming of Thoroughbred racehorses in the US is governed by Jockey Club Registry Section 6:E(x). Banned are "Names that are suggestive or have a vulgar or obscene meaning; names considered in poor taste; or names that may be offensive to religious, political or ethnic groups." Despite this, some horse owners manage to sneak in names like Peony's Envy

Pan-European Game Information
PEGI is the industry body that assigns age ratings to video games throughout Europe (except in Germany, who have their own system). Information on the age ratings is listed here

; you can also view the internal questionnaire they use to assess games here

(but not entirety) of music publishers and record labels, and claims to release 85% of all music in the country.. Since 1985, in response to complaints from parents, RIAA members have attached Parental Advisory labels to records, CDs, and digital files when the producers believe that parents might find the lyrics objectionable. You can read the standards here

As with American TV ratings, the decision of whether or not to apply the label is decided internally by the publisher, who have considerable discretion in whether or not to apply it. Fortunately, they are aware that lyrics can have multiple interpretations, and are not particularly concerned about double entendres or cursing that is hard to make out. It should also be borne in mind that the sticker only applies to the audio and not to the music video.

Alternative Title(s): Get Crap Past The Radar, Radar