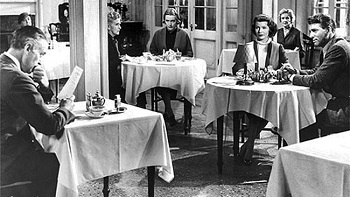 Separate Tables is a 1958 film adapted from a pair of one-act plays of the same name by Terence Rattigan, directed by Delbert Mann, starring Burt Lancaster, Rita Hayworth, David Niven, Deborah Kerr, and Wendy Hiller. The film features two largely unconnected stories at the cozy little Beauregard Hotel in Bournemouth, which features a mix of long-term residents and temporary guests.note  The lead male and female roles in both one-act plays are written to be played by the same performers; the supporting characters are identical.

David Niven won an Academy Award for Best Actor, in the shortest performance for any winner of that category

(23 minutes, 39 seconds) and Hiller won for Best Supporting Actress. Hiller had the best reaction ever to winning an Oscar: "I hope this award means cash - hard cash. I want lots of lovely offers to go filming in Hollywood, preferably in the winter so I can avoid all the horrid cold over here."