Way Past the Expiration Date 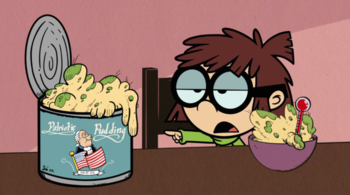 "Seeing as this flag on the label only has 48 stars..." Man, you don't wanna know how old it is.note For history fans out there, the U.S. had 48 states between 1912 and 1959
"This expired milk is a important plot point! On a show about ninjas! *drinks* "Man, that's GOOD food poisoning!"
— Naruto Uzumaki, Naruto: The Abridged Comedy Fandub Spoof Series Show

A comedy trope, in which a character buys, sells, or consumes food products that expired a comically long time ago, years, decades, or even centuries in the past. It may have come from the fridge. For the horrible consequences that usually follow, see The Food Poisoning Incident. Contrast Indestructible Edible and Inexplicably Preserved Dungeon Meat.