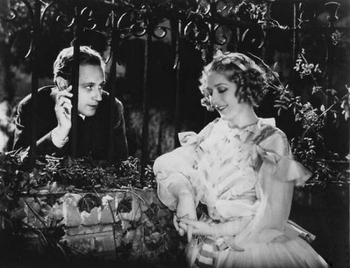 Mary Marlowe (Mary Pickford) is a child of privilege, daughter of a wealthy New England banker. She has been pledged by her father into marriage with Lord Hurley, an effete British aristocrat. However, she's in love with John Carlton (Leslie Howard), a clerk at her father's bank. Her father William (C. Aubrey Smith) finds out about this and not only fires John, but says he'll prevent John from getting a decent job anywhere in New England. Meanwhile, Mary's marriage to Lord Hurley will take place in two days.

John and Mary elect to elope. They head out to California and raise cattle. They get rich, and John becomes a prominent man in the new state of California, eventually running for public office. However, John has a wandering eye, and his affairs threaten both their marriage and his political career.

Mary Pickford's last film. 41 years old, she was no longer able to play The Ingenue or Dawson Casting roles, and the public proved uninterested in seeing her tackle adult fare.