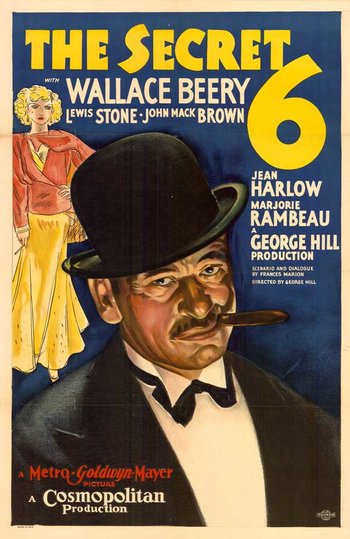 The Secret Six is a 1931 film directed by George W. Hill.

It's a gangster film. Louis "Slaughterhouse" Scorpio (Wallace Beery) is called that because he works in a slaughterhouse whacking livestock on the head with a sledgehammer. It doesn't take much convincing for Johnny Franks (Ralph Bellamy, in the first role of a 59-year film career) to leave pig slaughtering behind to join his gang. Gang leader Richard Newton (Lewis Stone), who's also a practicing attorney(!), likes Scorpio but Johnny Franks gets jealous and tries to betray Scorpio to their enemies. Scorpio survives and kills Franks instead.

Scorpio takes Franks's position as head of the gang under Newton. Soon the Newton gang takes over the city of "Centro", aka Not Chicago. Scorpio directs one of his molls, Anne Courtland (Jean Harlow), to seduce Hank Rogers (John Mack Brown), a newspaper reporter who's bringing too much attention to Scorpio's criminal activities. Scorpio succeeds in bribing a second reporter, Carl Luckner (Clark Gable). What Scorpio doesn't know is that a gang of vigilante businessmen, the Secret Six, is working to take him down—and Carl Luckner is working for them.

The first of six films to pair Jean Harlow with Clark Gable, although in this one they only share a couple of scenes.