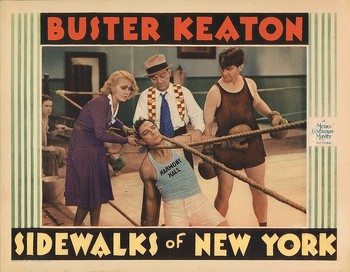 Keaton plays Homer Van Dyne Harmon, a wealthy slumlord who goes to visit his tenements one day and gets caught in an epic donnybrook of a foodfight between rival gangs of juvenile delinquents. When a feisty young woman named Angie (Anita Page) incorrectly thinks that Harmon is beating up her little brother Clipper, she charges out from her tenement and knocks Harmon flat with a right cross to the jaw. Harmon is smitten.

Determined to win Angie's affections, Harmon builds a gym for the local street youths to hang out in, and eventually he coaxes them into using it. However, young Clipper is a wannabe criminal who has entered into a grown-up gang led by a hood named Butch. Clipper's appetite for crime is greatly reduced when Butch gives him a very grown-up job: kill Harmon.

The Duck Season, Rabbit Season routine listed below was later recycled in Three Stooges short "The Three Stooges: Disorder in the Court".

Not to be confused with the Ben Stiller 2001 film of the same name.