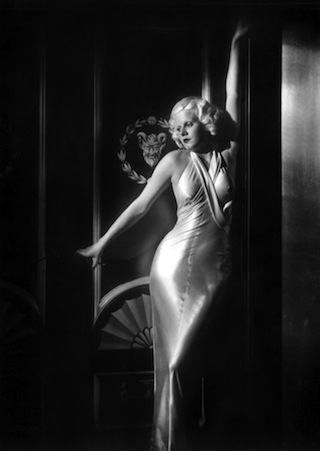 She was born in Kansas City, Missouri. In the 1920s, she and her mother moved to Hollywood, and Harlean, taking her mother's name, went into acting. After several bit parts in silent films, she had her breakout role in the 1930 World War I movie Hell's Angels, produced by Howard Hughes. In this film, she coined the famous line "Would you be shocked if I put on something more comfortable?" In 1931, she appeared in the classic gangster film The Public Enemy (1931).

While critics disliked Harlow, audiences loved her; her movies were successful, even in the middle of The Great Depression. Her films pushed boundaries; in Red Dust, she portrays a floozy who gets the guy at the end, and in Red-Headed Woman she plays an ambitious Gold Digger who sleeps her way to the top and doesn't receive any punishment for it.

After the implementation of The Hays Code (which cracked down on sexuality, both in and out of films), she changed her image to a more mainstream, all-American type, but still remained a star. During the filming of her last movie, Saratoga, she fell ill, and was taken to a hospital. She died a few days later at the age of 26, from kidney failure (once rumored to be from the chemicals she used to dye her hair; now stated as a possible consequence of scarlet fever she had as a child).

She was an idol of Marilyn Monroe.