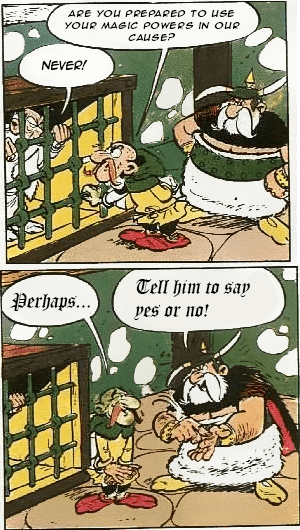 He doesn't speak Blackletter.
"I came over with the British trade mission years ago. I was soon relieved of my position. I had an unfortunate tendency to tell the truth in a country where no one ever says what they mean. So now I very accurately translate other people's lies."
— Simon Graham, The Last Samurai
Advertisement:

It often happens that in international business, politics, or two sides meeting before a battle, that a translator is needed for the two (or more) sides to understand each other. It just as often happens that one side will either intentionally or unintentionally say something insulting, offensive, personally distasteful to someone on the other side, engage in a bit of Cultural Posturing, or make an outright threat that would either sabotage the talks or needlessly aggravate the other side. As the translator what do you do? Do you repeat all that accurately and maybe end any chance of agreement, not to mention possibly pissing off your boss? (Generally not a good idea if you happen to be translating for the Big Bad, by the way.)

No, if you're smart, you choose to do a Tactful Translation, translating the spirit of what was said or is important, while leaving out all the insulting, offensive, or just plain stupid stuff that would only get in the way or complicate things. Odds are that afterward all the sides will go home feeling pleased with themselves or thinking they really showed those other guys, while only the translator(s) will know just why that whole deal worked out without turning into a bloodbath.

Now, if the one on the receiving end of the translation actually speaks the language...

Often winds up looking like a case of Translation: "Yes". May be the job of a Completely Unnecessary Translator.

Contrast Trolling Translator, who twists translations far from the intended meaning, and Translation with an Agenda, who outright says whatever he feels like to suit his purposes. Also see Spice Up the Subtitles. See also Narrative Profanity Filter, when someone recounts something but decides to leave out the offensive bits.

Roz asks Frasier to translate when she breaks up with her French boyfriend. But what Roz thinks they're saying and what they're actually saying are two very different things.

Roz asks Frasier to translate when she breaks up with her French boyfriend. But what Roz thinks they're saying and what they're actually saying are two very different things.