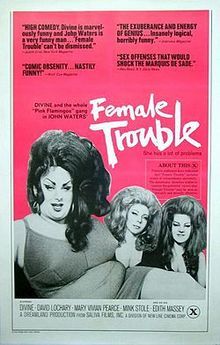 She's got a lot of problems.
"Where do these people come from? Where do they go when the sun goes down? Isn’t there a law or something?"
— Rex Reed in his review, which was put on the official movie poster
Advertisement:

It tells the story of Dawn Davenport, from her youth back in the 1960s to her increasingly bizarre and violent life of crime after running away from home.