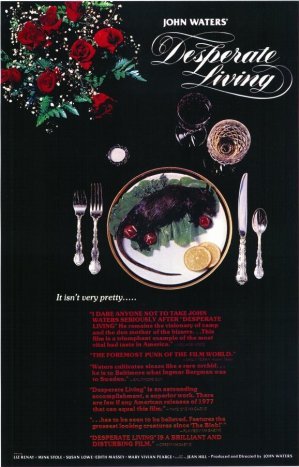 Desperate Living is a 1977 Black Comedy film written and directed by John Waters. It's the only film of his that doesn't star Divine prior to his death, as he was busy with another project at the time.

The film begins with Peggy Gravel, a suburban Social Climber, going on a psychotic break and murdering her husband. Her maid Grizelda Brown, a Sassy Black Woman, assists with the murder because the husband caught her stealing and was about to fire her. The two women go on the lam and end up in the Outlaw Town of Mortville. There they share a hovel with a lesbian couple, Mole McHenry and Muffy St. Jacques, who are butch and lipstick respectively. Meanwhile, Mortville is under the capricious rule of Queen Carlotta, the Big Bad, who enjoys putting her "subjects" through a never-ending Humiliation Conga. However, she is having her own problems with her daughter, the Rebellious Princess Coo-Coo, who is having a Forbidden Romance with a nudist garbageman.

It Makes Just as Much Sense in Context.