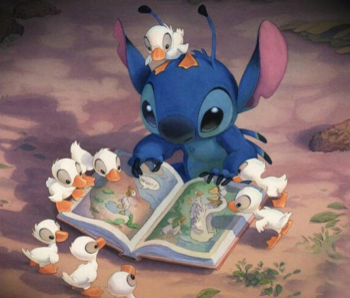 Some monsters are simply animals. They might be unusually smart or have extra limbs or even heads, they might be bigger than their real-world counterparts, but in the end they're clearly the domain of zoologists and concerned mainly with food, territory and mating. Some monsters go out of the way to make life difficult for the hero or humans in general, they are Always Chaotic Evil. Some monsters are so powerful and dangerous they are beyond the very comprehension of mortal men; the wisest course of action on encountering one of those is to run, and even then the odds are against you.
Advertisement:

And then there is another kind of monster. Maybe they're just a baby, and someday they'll grow up into one of the first types of monsters, but until then they're not so bad. Maybe they've discovered The Power of Friendship. Maybe they try to be evil, but they're not very good at it. Maybe in-universe they're horrifying, but the audience gets to see the softer side of them. But whatever the reason, these monsters aren't very monstrous. Simply put, they're adorable.

Related to Cute Monster Girl, but where those are generally cute in a humanized way, these are generally cute in the sense of kittens, puppies and babies. Fanfic focused on cute monsters is generally less focused on relationships between them and humans than fanfic focused on Cute Monster Girls; sure, it happens sometimes, but not as often and when it does it's less supported by the Canon. If owned by one of the main characters may count as a Cool Pet. As mentioned above, some of these also count as Ridiculously Cute Critters, but these are all still monsters, and they just happen to not be dangerous, or not dangerous to the right people, or only in an endearing way.

In some cases, the Cute Monster might be an Eldritch Abomination themselves, see also Adorable Abomination.

Compare with Cute Creature, Creepy Mouth, which may supply both the "cute" and "monster" parts of this trope.