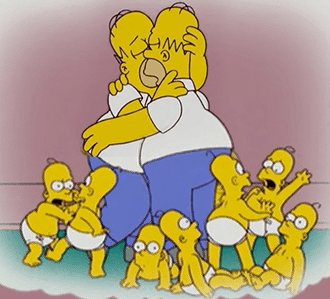 It's a simple tale: Person photocopies self, or travels to an Alternate Universe, or another time. Person meets self. Both selves "make beautiful music" together. After all, what better person to be most intimate with?

Probably more prevalent in fanfiction than in original works, but it's out there. Technically, any intimacy between a character and their Enemy Without will be this. Expect much argument amongst the characters, fans, and oftentimes even both as to whether this qualifies as actual sex, incest (it could be considered super-incest since there's no closer relative possible than yourself, as even an identical twin will have some minute, statistically negligible genetic differences), or masturbation. When a good chunk of the fandom agrees to ship a character's alternate selves together despite all of this, including alternate selves the fandom made up, that's Alternate Self Shipping.

In erotica, this is often considered more acceptable than most other types of fetishes (like say, incest), seeing as it's, well, impossible in reality.note For now, anyway. Cloning's coming along pretty nicely.

Sometimes, a literal copy of the person in question doesn't need to be present for under- or overtones of this trope to appear. Sometimes, one character can express lustful feelings towards another because they remind them of themselves, usually in their looks (especially common with the Narcissist).

Note that this is not the same as A Date with Rosie Palms.

Nor is it the same as Screw You, Elves!

Often is an invoked case of If It's You, It's Okay. If the character otherwise generally considers themself asexual, might very well be a case of Single-Target Sexuality.

It doesn't last however, as the two versions leave him for each other.