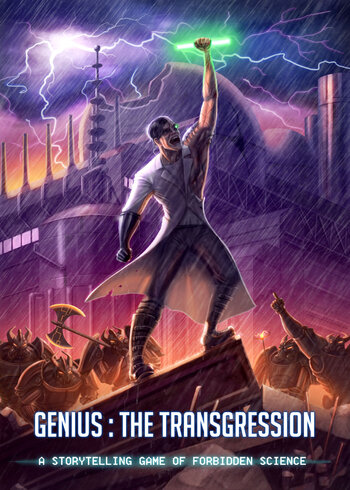 "There must be something. Some purpose. Some meaning. Oh God, there must be some point to all this. I watched my friends die, watched the rockets we made fall from the sky to rot in fields in Ohio or Ukraine. What was this for?"
— Doctor Jonas Cliver, Genius
Advertisement:

is a fan Gameline for the New World of Darkness setting created by the author/artist of webcomic The Water Phoenix King, Kyle Marquis (better known on RPG.Net as Moochava), detailing the adventures of Geniuses, Mad Scientists who can build impossible machines (called Wonders) thanks to their connection to the mysterious light of Inspiration. Drawing on every sci-fi and horror cliché out there, Genius justifies the setting, expands the tropes along their logical progression and links its themes to the real world. It will be instantly familiar to any fan of the genre.

The five Foundations, the organisations of non-Lemurian Geniuses, represent various branches and kinds of mad science.

There's also unaffiliated Rogues, Programs that act as minor Foundations (the most prominent being the Asia-based Ten Thousand Fans), and of course, Lemuria.

Lemuria's Baramins are, by default, the antagonist faction. They haven't got the memo that yes, they're MAD, and their theories and inventions only work by cheating reality. They believe that something went wrong with the human race's scientific and technological development, and they are hellbent on correcting the problem. Each Baramin is defined by where they think humanity went wrong and what must be done to correct the issue. This doesn't always work out so well.

Genius was made on RPG.net and has slowly grown into a setting as rich and detailed as any White Wolf has created. Accessible through this elegant and finely-crafted link.

A work-in-progress wiki can be found here

A second edition is has been written

by a different creator. It is technically unofficial, but given the game's origins...

This game features the use of:

This game lets you build: