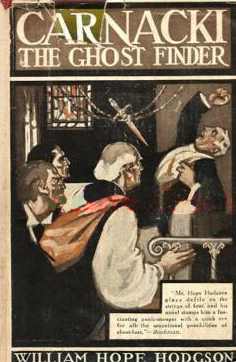 Carnacki The Ghost-Finder is a collection of short stories by William Hope Hodgson, all concerning the exploits of the eponymous Thomas Carnacki, an Occult Detective. The original 1913 edition contained six stories, which had been separately published in The Idler magazine over the preceding few years; a 1948 edition added three more.
Advertisement:

Carnacki, an accomplished gentleman occultist, brought an empirical attitude to his investigations as well as several high-tech (for 1913) gadgets, ranging from photography to a protective device of his own invention called the electric pentacle. Unlike many occult detectives, his cases included a mix of hoaxes and genuine hauntings, meaning there's always some suspense in the stories as to what's really going on.

One Carnacki story, "The Horse of the Invisible", was adapted for television in 1971 as part of the British TV series The Rivals of Sherlock Holmes; Carnacki was played by Donald Pleasence. An unabridged audio play adaptation of the original six stories was released in 2016 by Big Finish, starring Dan Starkey as Carnacki.

Since Carnacki is no longer copyrighted, he's free to appear in other media as well.

Download or read the full text online at Project Gutenberg

or the University of Adelaide