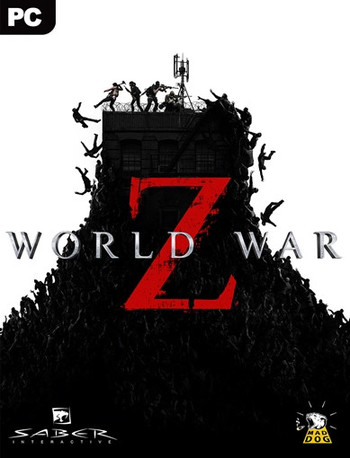 A Co-Op Multiplayer Third-Person Shooter developed by Saber Interactive and based on the movie adaptation of the book of the same name.

The game is split into several episodes, each one focusing on different locations and situations:

You are one of a Ragtag Quartet of Misfits caught in the middle of the outbreak of a deadly virus that's turning people into bloodthirsty mutants. Your objective is to make your way from one objective to another through an area infested with these murderous creatures, and finally, reach a pickup point from which to summon the cavalry to spirit you to safety. Along the way, you and your allies will meet up with different people who are willing to help you to safety.

Of course, this won't be easy. You have your three pals, and due to the Drop-In-Drop-Out Multiplayer nature of the game, there are competent AI bots standing by for when you don't have allied players. And don't worry about them hogging the kills: there are plenty of Zekes to go around. There could be a herd of several hundred zombies (which will happen often), or just one extremely powerful mutant zombie waiting around the next corner. The game's proprietary "Swarm Engine" is watching your progress and planning your next sudden encounter; play the same campaign five times and each time will be a different experience.

Fortunately, you have a giant pile of guns and six different character classes at your disposal. Whether you like More Dakka, Stuff Blowing Up, Incendiary Devices, Keeping Your Team Alive, Having Tricks Up Your Sleeve, or just Hacking Everything To Bits, there's bound to be some flavor of zombie-killing that you'll find to your liking.

Does this sound kinda familiar?

After roughly a year of silence regarding new content, in 2021, an "Aftermath" Expansion Pack is announced, promising to wrap up the plot by adding two campaigns, as well as the addition of new features, such as a First-Person Shooter mode, a new class, and a new special "Zeke", a swarm of plague rats that developed a taste for living, human flesh.

Not to be confused with World War Z 2013 for mobile developed by Phosphor Games Studio.