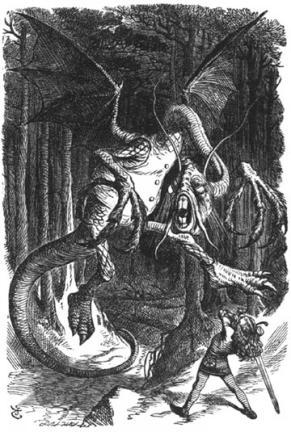 A nonsense ballad by Lewis Carroll to parody overwrought and poorly-written yet seriously-intended poems. It appeared in Through the Looking-Glass, the second of Carroll's Alice books.

Some of the nonsense words invented by Carroll for the poem — like "vorpal" and "chortle" — have entered usage and become semi-official words.

Be aware that, while "Jabberwocky" is the name of the poem, the eponymous monster is the Jabberwock.

It is also said to have been inspired by a tree. Make of that what you will.

Carroll's The Hunting of the Snark is a Spiritual Successor to this poem, and features several of the same creatures, though not the Jabberwock itself.

In 1999, prog rock keyboardists Clive Nolan and Oliver (son of Rick) Wakeman recorded a Concept Album based on the poem, with Wakeman Sr. reading bits of the poemnote  not always 100% accurately between the songs.

The poem contains examples of: