Literature / The Hunting of the Snark 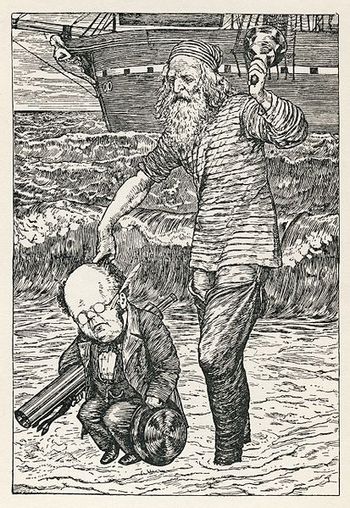 "The Hunting of the Snark (An Agony in 8 Fits)" is a Narrative Poem by Lewis Carroll, telling the story of a group of unnamed adventurers as they search for the elusive Snark, a vaguely-described creature which lives on a remote island.

The poem may be considered a Spiritual Successor to "Jabberwocky" from Through the Looking-Glass, and contains several of the same creatures that are mentioned in "Jabberwocky".

Worth noting is how the poem was constructed - the last line was the first line that Carroll thought of. The rest of the poem was made to build up to it.

Douglas Adams gave a Shout-Out to the poem in the original radio version of The Hitchhiker's Guide to the Galaxy by titling the episodes "Fit the First" etc.

You can read it on Wikisource.

For the Snark was a Boojum, you see.