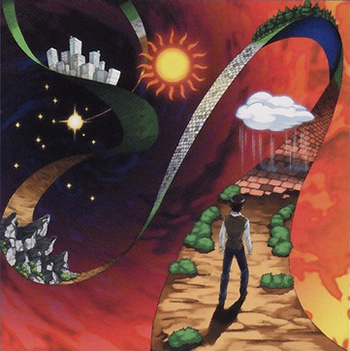 A bending road, a tiny raincloud, a city in the middle of space, and a sun and starry night right next to each other. All seems pretty normal to me.
"... Follow her down to a bridge by a fountain
Where rocking-horse people eat marshmallow pies...
Everyone smiles as you drift past the flowers
That grow so incredibly high..."
— The Beatles, "Lucy in the Sky With Diamonds"
Advertisement:

Improbable fauna, impossible flora, and — oh my — the sky's started melting. Yep, looks like you're in a World of Chaos.

This setting is a bizarre mixture of elements from our world thrown into a blender, with a few squirts of lemon and a pinch of LSD. Everything comes together in outlandish and unpredictable combinations. Bright colors, strange creatures, and total disregard for logic are all in play. Anything can and will happen.

It may be the result of a Mushroom Samba, or be All Just a Dream of someone with a particularly vivid imagination. But if it's real, the characters will need a lot of luck, and their intuition will be more valuable than intellect. Worlds of Chaos are places of great whimsy and danger, much of which stems from the inability to comprehend what's at work in them. In this respect, they're like The Fair Folk in the form of a place. Precisely why and how these worlds behave in this manner can vary, but they're usually dream worlds where reality is subjective and ever-shifting, realms dominated by primordial forces of chaos, or somewhere outside of the shaped and ordered universe altogether. If a God of Chaos is present in the same setting, changes are good he'll make his kip here.

Alien Geometries may be commonplace. Not to be confused with World of Weirdness (a more mundane world with some fantastic elements) or The Wonderland (which has rules, just not the ones we're used to). Worlds inhabited by Starfish Aliens may not qualify, as they may have a little more internal consistency even if they're beyond our comprehension, plus the inclusion of recognizable elements is what gives this setting much of its edge.

Related to World Gone Mad, which started out normal before going completely bananas.

There's a good possibility you'll find yourself having tea with Cthulhu — possibly literally, if someone is simultaneously homaging Alice in Wonderland and H. P. Lovecraft. Compare Eldritch Location, Cloud Cuckooland, World of Weirdness and Reality Is Out to Lunch.

Not to be confused with giant Heartless ships.