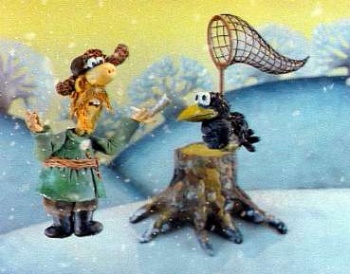 Last Year's Snow Was Falling is a Soviet clay-animated film (with a few cel-animated parts) made in 1983 by Aleksandr Tatarskiy.
Advertisement:

It tells a story of a dude whose stern wife sends him to the forest to get a New Year tree. The guy is lazy, extremely greedy, even more air-headed and "can't spell some letters and digits right".