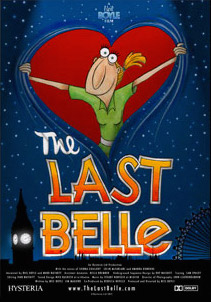 The Last Belle is a 2011 traditionally animated short film co-written and directed by Neil Boyle.

And when we say traditional, we mean traditional! As in hand-drawn animation drawn on paper, inked and painted on cels and photographed with an analog camera. Boyle, who came out of the early days of The Renaissance Age of Animation, having animated for Who Framed Roger Rabbit and the last leg of The Thief and the Cobbler to be made under Richard Williams' direction, wanted to create a film that would remind younger generations of animators that the pre-digital process of hand-drawn animation was still just as relevant as CGI or even tradigital.