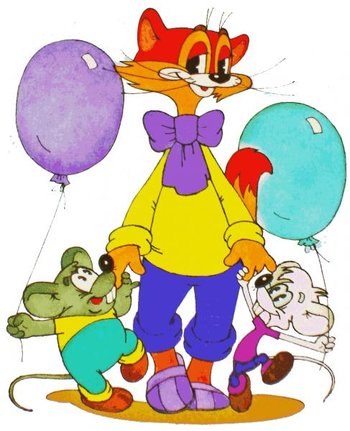 "Guys, let's all get along."
— Leopold
Advertisement:

Leopold the Cat (Russian: Кот Леопольд, Kot Leopold) is a Soviet/Russian animation series about the pacifistic, and intelligent cat, Leopold.

Leopold always wears a bow tie even when swimming. He is always confronted by two mischievous mice, Grey and White (Mitya and Motya). It was filmed by T/O Ekran in 1975 - 1987 and its runtime is 87 min (10 episodes). As of 1987, there were 11 episodes in total. Eventually, in 1995, most of the episodes were released on VHS.

Fondly remembered by everyone for Leopold's Catchphrase which would definitely show up at the end of every episode, as well as somewhere in the middle of these.

A revival series was commissioned in 2015.