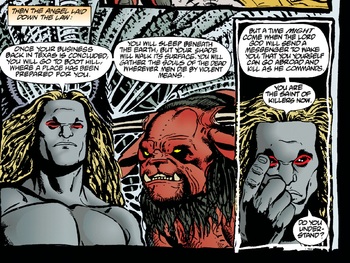 Dear Mr. Craig. We have been following your career for some time now, and we've decided to make you an offer. We believe you have endless talent in the field of murder. Please send us a copy of your resume along with a dismembered human corpse and a quart of goat's blood.

A Sub-Trope of Deal with the Devil, where Satan has something very specific in mind for this one mortal: offer them lucrative career opportunities!

Why would the Devil make this particular offer? Perhaps they recognize this person's skills and think they would make a better servant of Hell than one of its prisoners. Or maybe he just recognizes how evil this particular human is and sees the offer as a reward. After all, if Humans Are Bastards, wouldn't they make the perfect talent pool for the forces of evil?

Most will grudgingly take the offer just to get back to Earth. As such, this has a very high chance of backfiring on the Devil in a Faustian Rebellion.

Often involves Super Empowering of some sort with the devil bestowing a whole set of infernal abilities upon his new minion. The deal may require becoming a demon in the process, but doesn't have to. If this happens after someone died and/or went to Hell, it overlaps with Resurrected for a Job.

See also We Can Rule Together.