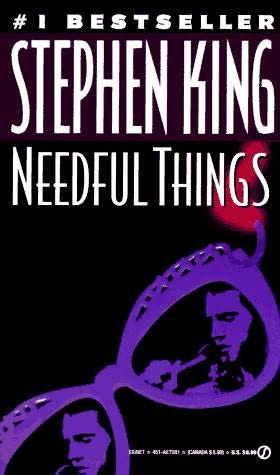 A 1991 Stephen King novel in which a new store with the strange name of "Needful Things" opens in the small Maine town of Castle Rock. It is run by a seemingly kindly old man named Leland Gaunt and happens to have something that each of the main characters wants. They only need to pay a minimal sum...and they have to agree to play a little prank on someone. It goes downhill from there, as the "harmless pranks" eventually trigger a chain reaction leading to plenty of suicides, killings, and Stuff Blowing Up.

The story mainly revolves around Sheriff Alan Pangborn and his attempts to find out just what is going on in his town.

Made into a movie in 1993 starring Max von Sydow as Gaunt and Ed Harris as Sheriff Pangborn.