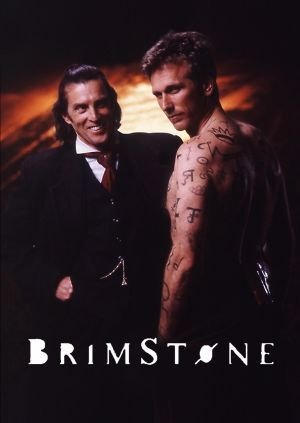 "Bless me, Father, for I have sinned. It has been a long time since my last confession. I was a cop, and good at my job. I was married; I had a good life. Then my wife was raped. We caught the guy who did it, but he got off. So I tracked him down and I killed him. Two months later, I cornered this petty thief who had a gun. He opened up on me, and I took five bullets to the face and neck. I died. And because I had killed a man in cold blood, I went to Hell. You know it's funny, but even in the most maximum security penitentiary, from time to time, inmates will escape. It happened on Devil's Island. It happened at Alcatraz. Six weeks ago... it happened in Hell."
— Ezekiel Stone
Advertisement:

A kind of satanic version of Highlander. Detective Ezekiel "Zeke" Stone (Peter Horton) was damned to Hell in 1983 for killing, in cold blood, Gilbert Jax, the man who raped his wife after he got Off on a Technicality. Fifteen years later, 113 of the most vicious damned souls in Hell escaped to Earth. Satan (John Glover), furious at having been "beaten," sent Stone back to Earth to track them down and kill them, returning them to Hell. If he succeeds, he gets the greatest reward of all: A second life on Earth, and thus a second chance at Heaven.

The show starts off in New York but, starting with as early as the second episode, takes places in Los Angeles, perhaps due to the fact that a resurrected hero cop going around his old haunt, so to speak, might attract unwanted attention.

Unfortunately, it suffered from constant preemptions and never quite found its audience, and was canceled after just 13 episodes. Lasted from October 1998 to February 1999.

The television show Reaper is eerily similar in concept to Brimstone, though played for comedy rather than dark action.