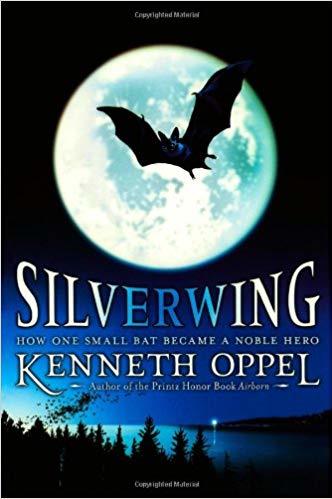 "Many of these animals had already been written about, and most of them were reasonably cuddly: horses, mice, pigs, rabbits, even spiders. But will kids be able to identify with bats?"
Kenneth Oppel, "Author's Note" in Silverwing
Advertisement:

The Silverwing trilogy is a series of books written by Kenneth Oppel, consisting of Silverwing (1997), Sunwing (1999), and Firewing (2002). They're a sort of Gothic-esque fantasy adventure about bats, specifically the main character, Shade, a small Silverwing bat who is frequently mocked and called "Runt". After breaking one of the animal world's biggest rules, becoming a fugitive, and getting lost at sea during a migration, Shade goes on a wild adventure with a new friend, street-smart Tomboy Marina Brightwing. Things get worse when Goth and Throbb, two giant carnivorous bats from Brazil, escape a research facility and begin killing birds and other creatures at will. The little bats get blamed for it, landing Shade and his colony in a battle for the rights of all their kind.

Also related to the trilogy is a fourth book, Darkwing, which was released in 2007 and explores prehistoric bats. Dusk, a chiropter (a fictional name the author uses to describe the species) is the first of his kind who can actually fly instead of glide. During a time of evolutionary upheaval, he must lead his clan to safe new territory.

The series was also adapted into an animated series. See its page here.