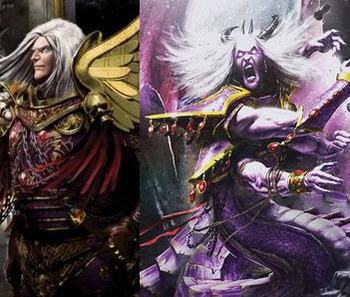 Fulgrim, before and after his transformation into a Daemon Primarch of Slaanesh.
"It might take centuries, but sooner or later Hell will burn away your humanity. Every Hell-bound soul, every one, turns into something else. Turns you into us."
— Ruby the Demon, Supernatural
Advertisement:

This demon was once a mere mortal, usually someone who had been sent to Hell but eventually joined the ranks of his torturers. In some settings this may be the only way that new demons are created, with every demon having once been a soul sent to the basement.

Perhaps they were cursed to suffer this fate or their souls were tortured until nothing but a monstrous apparition remained. They could also have sought it out deliberately, acquiring the powers of hell at the cost of their humanity. Or maybe The Devil directly made them the offer to become one of his infernal minions. Whatever the case, what Was Once a Man is now a new demon.

This may be the ultimate goal of a Hell Seeker. Given enough time, someone this ambitious may even become one of the officers or actually overthrow the big boss himself.

The process is not always irreversible: see Ascended Demon for those who manage to redeem themselves.

This idea is Newer Than They Think, at least in Western circles. The Book of Revelation indicates this is not possible, as demons are simply the Fallen Angels who joined Lucifer in his original Fall from Heaven. Humans are also categorically capable of redemption, so while the Devil can tempt them into sin, a sinner can't literally forsake their humanity to become a bodiless spirit of pure evil.

Subtrope of Our Demons Are Different. Compare Deity of Human Origin, Angelic Transformation, and Human-Demon Hybrid. See also Evil Makes You Monstrous. Contrast Humanity Ensues. Compare and contrast Eldritch Transformation and Transhuman Abomination, which are exaggerated forms of this trope.